The Church of Saint Ann

"The Little Church That Could...and DID"

A Parish of the Roman Catholic Archdiocese of Boston 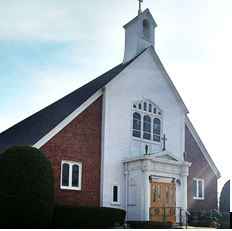 The History of Saint Ann's Church

With the acquisition of the land, a committee was established to build a Catholic Church in West Bridgewater.  Until the church could be built, the committee sought permission from the town to use the local town Hall for Sunday service.  On July 17, 1927, the Holy Sacrifice of the Mass was publicly celebrated for the first time in West Bridgewater in the Town Hall.

Donations for the erection of the church were requested, a donation of $5,000 would give the donor the privilege of naming the new church.  This donation was received from  Dr. A. O. Belmore who requested that the church be named in memory of his late wife Anna Belmore.

The years between 1927 and 1933 were hard years of economic deprivation.  West Bridgewater was a rural area of 15 square miles situated 30 miles southwest of Boston.  Census figures of 1930 showed a population of 3,206.

By  1932, there were 150 Catholic families in West Bridgewater and it was decided that the original parcel of land was too small.  The current location was purchased with a $5,000 mortgage from Bridgewater Savings Bank with the support of Cardinal O’Connell.  The foundation of the current church was laid in 1932.

On January 29, 1933, the Opening and Blessing of Saint Ann’s Church took place.  The following is an article from the Brockton Daily Enterprise, January 30, 1933.

“The impressive services at the new Saint Ann’s Church Sunday morning, which included the blessing of the church and solemn High Mass, attracted a large number of visitors from other churches of the Boston Archdiocese."

“A congregation of 589 people observed the opening of the new church and attended the initial Mass."

“For the past five years,  Masses have been celebrated in the Town Hall which was hired for a church.  As a result of their labors, they (the parishioners) have a beautiful and modern building of which they may well be proud.  It is constructed of brick, steel, and wood, the outer walls being veneered with brick.  Although it is not completed, it is far enough along to allow the use of it on Sundays.”

Saint Ann’s remained a mission of Saint Thomas Aquinas Parish.  From January, 1933 to April, 1938, with the exception of the popular annual Novena to Saint Ann, only Sunday Mass was offered.  No ceremonies including weddings and funerals were conducted.

Meditation garden captures the past at St. Ann’s Church in West Bridgewater. The completion of the vision coincides with the church’s 70th anniversary